Advanced Data Analytics: One of our Data-Sets is Missing! 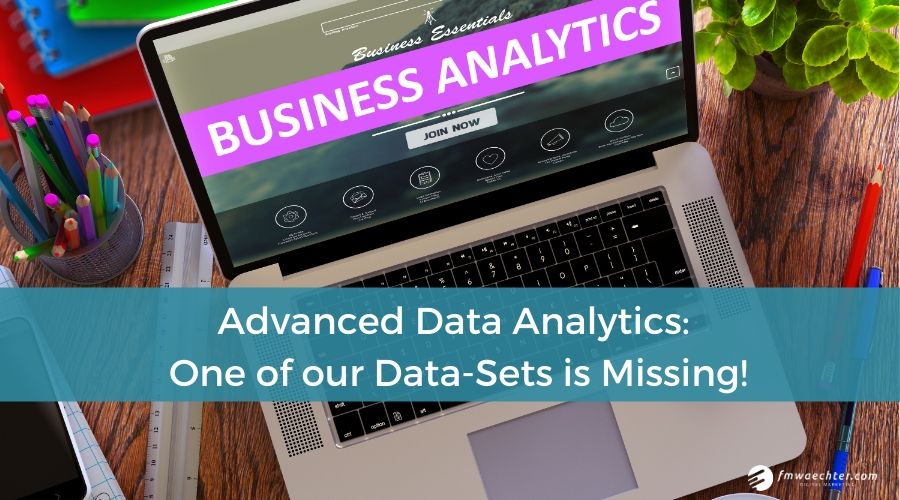 There is a false maxim, which still does the rounds, that blights any industry that uses computational models to analyse its marketplace. Interestingly it’s one that’s often rolled out by so-called panels of experts. Often with a self-serving smile on their faces. I’m talking about “lies, damned lies and statistics”: a statement that suggests that data can be manipulated in any fashion to arrive at whatever conclusion one wants. Businesses, however, are primarily interested in using the information to improve their performance; not to massage the figures on their end-of-year accounts. Data has the power to transform companies’ balance sheets; the real issue is not whether we should rely on data, but how good it is and whether we are using the right methods to understand it.

What we can do now that we couldn’t do yesterday

Advanced data analytics can deliver the power of computing to help organisations understand their customers in a way that was unimaginable just a few years ago. Algorithms, which in the past required that data be boiled down to unambiguous text and figures, can now be built to interpret pictures, video, even the nuances of speech. Why is this so important? Because the best information of all, particularly that contained in word of mouth, will be found in people’s interactions with each other on social media. Increasingly this is where the data is; the data we will miss out on if we don’t fully engage with our online communities.

“He’s only a Wookie”

To give a topical example, Candace Payne’s decision to video herself enjoying the moment she tried on Hasbro’s electronic Chewbacca mask broke the record for most viewed Facebook Live video by a country mile. Media outlets just cannot keep up with the rate at which her post is being viewed. But we are now comfortably into the hundreds of millions.

Related Blog: Marketing for Associations: 4 Reasons to Use Google Analytics

The most interesting fact of all about this viral video to beat all other viral videos is that the product at its centre was purchased in a clearance sale. Now the company has a moneymaker beyond its wildest dreams. For which it can justifiably pitch a market price that meets the new demand Candace’s video has created.

How advanced data analytics and Candace Payne go together

What Hasbro does next will determine how much hay they can make while the sun is still shining. Think back to the comment I made about Candace’s video. In the few minutes that I’ve been writing another fifty words or so, her views will have gone up in the thousands, maybe even the tens of thousands. Who’s looking and where are they? What are they saying? And perhaps most important of all, “when” are they? Not only can we find these answers; we can do so in real time. In other words, Hasbro and others can decide how they will respond to market opportunities on the basis of what their customers think now. Not what they thought last week, last month or last year. Knowing what’s happening to our own products and services can also be extended into understanding what our competitors are doing too. The new ways we can look at data are reinventing the world of statistics. Thanks to innovations in cloud computing, you don’t have to reinvent your IT infrastructure to take advantage of what advanced data analytics have to offer.

Related: Getting Started With The Digitalization Of Associations

The title for this blog paraphrases the 1942 film by British-Hungarian team of Michael Powell and Emeric Pressburger, “One of Our Aircraft is Missing”. The Dutch who rescued the airmen in the film assumed at first that they were spies. Because there was no trace of the plane they said they had bailed from. If they had had the sort of intelligence provided by advanced data analytics, they would never have jumped to the wrong conclusion.

At fmwaechter we can help you with your integrated data strategy and execution. Please get in contact with us.

← Social Media Marketing for the MICE Industry Formulating an effective approach to Content Marketing →
Share this post
Manage Cookie Consent
To provide the best experiences, we use technologies like cookies to store and/or access device information. Consenting to these technologies will allow us to process data such as browsing behavior or unique IDs on this site. Not consenting or withdrawing consent, may adversely affect certain features and functions.
Manage options Manage services Manage vendors Read more about these purposes
View preferences
{title} {title} {title}